Registration online at the Alpine Club of Canada

The Lake Louise ski area is excited to partner with the Alpine Club of Canada and to present the inaugural Ken Jones Classic Ski Mountaineering Challenge on Saturday, the 2nd of April, 2011.  With great prizing, support from local businesses, and $1,000 cash up for grabs, everyone will have fine odds of walking away with more than just memories of a good time.

Another race done for the Ski Mountaineering World Championships 2011, the Sprint Race.  The Sprint is a fairly new event in Skimo racing, but really encompasses every skill into one lung busting 120m climb, with a fast downhill and skate ski section. (Photo Below:  Josef Rottmoser during his insanely fast sprint race) 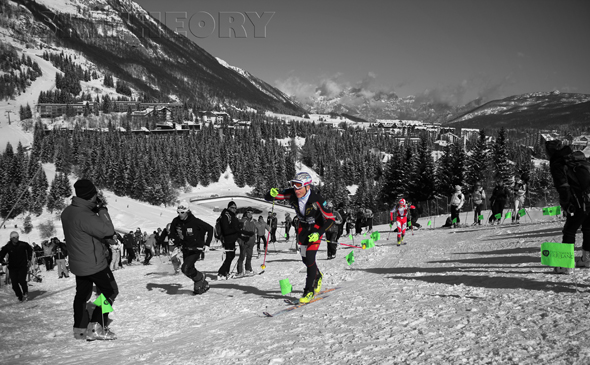 The course start with a 40m climb that is fairly low angle, to a 20m switchback section, into a 20m bootpack, then another 20m climb, transition and downhill into a slightly uphill skate ski.  Transitions, racing, and descending times are always expected at around 3-4 minutes.  The more technical a racer can be the more time he/she can shave off of this short course, but don’t forget the mega power endurance that comes from training for specificly for an event like this.

The race starts with racers being sent off every 30 seconds, running solo on the course, and trying to hit their top speed for a cutoff for a quarter final round, semi final, and final round devised of six heats.  The best way to describe it would be to do some long intervals, that would have bootpacking, switchbacks and transitions, at your best pace or until you taste blood.  (Photo Below:  Melanie Bernier (CAD) in the Final Heat) 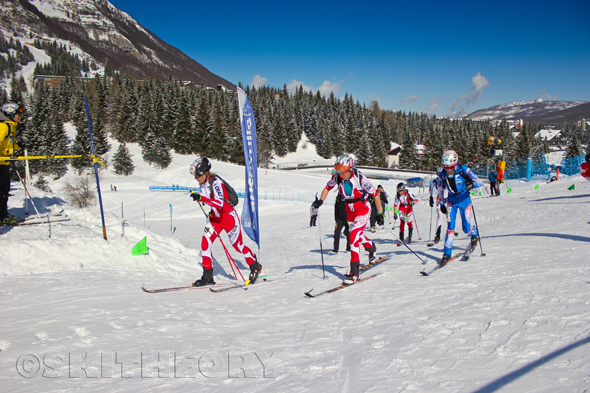 The fastest times were unbelievably fast, as the long distance enduro athletes North America produces, wasn’t up to par with the Sprint Specialists that Switzerland, Germany, France, and Spain brought.  That being said, Canada’s Melanie Bernier was the exception (again).  Mel, came blasting out of the start gate, making it into the Semi Finals right off the bat.  In the Semi’s she then led out of the start, resting slightly on the bootpack, but then tearing by the rest of the women in the transition gaining three positions putting her into the Final Heat.  In the Final heat, she started out strong, but when the Women who had been training specifically for this event put on the gas she just missed a high level finish.  Coming in at 5th, is the best result for North America at a World Championships ever (which was recently broken yesterday at the Vertical by Janelle Smiley placing 7th).  A strong race for Mel, and another step up for North America!

Note:  Race noted with a * will not be counted towards the point total, due to limited entrance numbers.
The American Schedule is looking pretty packed as well and can be viewed here. Expect bigger and more diverse races and course styles, this year is going to be a good one, both here at home, continental, and internationally.  See you on the start line.  Register for the season or any race HERE.

The race ran at 9:37 a.m. on the morning of 06 Feb 2010, at Sunshine Village ski area, starting from the Gondola Mid-Station at the base of Goats Eye Mountain.

It was a beautiful day for racing, calm, with little new snow, valley fog lifting as racers moved into the alpine along the course, and finishing in the bright sunshine at minus 4 degrees.

Awards and prize presentations were held in the Gondola Base Skier Services Room shortly after 3 p.m. in the afternoon.

Winners were Reiner Thoni, of Valemount after a very close finish with Team USA skier Brandon French, and Melanie Bernier, of Revelstoke, leading the Competitive women. Sharisse Kyle and Paul Watson took the honours for the Recreational Female and Male categories respectively.

Registration is now open for the 2010 – 6th Annual! – Sunshine 5000 ski mountaineering race. Starter’s “go” will be up at Sunshine ski area, west of Banff, Ab, early on the morning of Saturday 6th February. Technical meeting, on-site registration, maps, info, and review will be at 7 p.m. MT the night before, at the Alpine Club of Canada clubhouse, in Canmore. Advance registration is now available via telephone and credit card through the ACC Office at 403 678 3200 ext 108. As well, you can read race rules, schedule details, maps, and everything else you need to know – waivers, registration forms – at http://www.alpineclubofcanada.ca/ccc/ismc/index.html

$45 (plus nordic lift ticket on day of race)